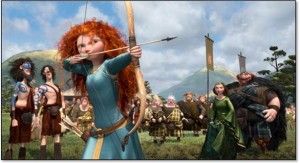 We were super excited to get to go see the premiere of the new Disney film, Brave last week in 3D – I am now hooked on 3D films! The story focuses on a princess named Merida in Scotland, but this isn’t your typical princess! She’s a great archer, loves to ride her horse, spend time outside – not the usual princess at all!

There are many lessons to be learned in this film, a lot focusing on the mother/daughter dynamics and it was really well done. A lot of great sentiment for the adults, and lots of fun for the kids.

I have to admit, my 6 year old was terrified of the commercials – the big bear really scared her! She was scared several times during the film, she actually yelled outloud at one point, and covered her eyes a few times. Once the film was over she never mentioned the scary parts again – guess it’s her first time realizing it can be really fun to be scared during a movie!

The 3D was amazing, you got to see a lot of beautiful Scottish countryside and I found myself forgetting it was even a cartoon, was easy to lose yourself in the time period and story. My #1 thing with kids films now is how many kids in the theatre get bored, or how many bathroom breaks etc. people take – for this premiere I don’t think I saw anyone actually leave the entire time! Pretty impressive, since most of us were in our seats 30-45 minutes before the movie started. It was great to hear the kids laugh, and squeal or scream during the scary times. Everyone in the crowd was really enjoying the film.

Without giving away too much of the story, it’s a great film for the whole family. Boys and girls seemed to enjoy it just as much, and for me I loved having a princess who was tough and could really handle herself, but who still really loved her family, tradition and wanted the best for everyone. Merida is a great role model for boys and girls alike! It’s always fun to see films as a family, when everyone enjoys it and the parents aren’t just there for supervision.

Did anyone else go see Brave this weekend? It’s playing at local theatres now, perfect film for the end of the school year outings!