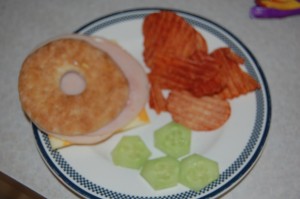 My 6 year old is the biggest ketchup fan in the world I think – which is why I was super excited to try out the new Lay’s Wavy Flavours. These are made specially for us Western Canadians! Here’s how Lay’s describes the new ketchup flavour – ” a sweeter, more tomato taste for the Western consumer who enjoys an old fashioned favourite “.

And here is how my 6 year old described them “They’re yummy because they’re saucy!” Which was pretty bang on. I couldn’t figure out what made them taste so different, but she’s right. Instead of it being almost powdery on your fingers after eating, it’s more saucy and thick. You really taste it in the chips too – very ketchupy, but not as tangy as a regular ketchup chip. My mom who doesn’t like ketchup chips tasted them and agreed they’re very different. They’re right – it’s a very sweet, tomato flavour.

And how did we celebrate the nice weather in Winnipeg today – a picnic in the hammock with some bagel sandwiches, cucumber slices and some Lay’s Wavy Flavour ketchup chips of course! These chips are actually only available from BC to Manitoba – didn’t really us prairie people and West Coasters were such big ketchup chip fans! 🙂 You can find these at all your regular stores, let me know what you guys think of them too!

As a mom, I was happy with these chips because with the sauciness on the fingers it was a lot less messy – my daughter insisted she didn’t need a napkin at all, way more fun licking it off when she was done! We love trying out new foods and flavours, and the 2 of us give these 4 ketchupy thumbs up!