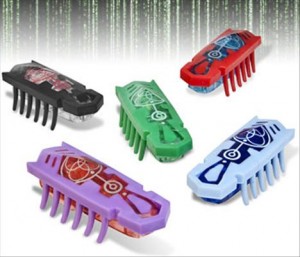 When we were asked to review Hexbugs I wasn’t too sure what to expect. I saw the commercials and it was older boys playing with them, so didn’t know what my 5 year old daughter would think of them. What an awesome surprise, she loved them! These are totally not just a toy for boys, they’re actually fun for the whole family. We set up the tracks and all had a blast playing with them. It’s super crazy, the little bugs vibrate and run around, you’d swear they were alive! You can race them, they can fight, you can just play with them pretty much anyway you choose. The extra sets are all really fun, and add lots of new dimension to the game play. They can race up spiral ramps, cross bridges, fight it out on battle platforms and so on. We had a big family party to go to and brought along just a few bugs and track pieces and I was surprised that kids from about 3-12 all had a great time playing with them. Was neat to see the kinds of combinations the kids can imagine for the tracks, and all the little games they come up with to play with the actual bugs! It’s hilarious to see the bugs get flipped over and then flip right back, and when they pass each other on the tracks it really looks like they’re fighting it out. They run on little batteries, and they last a really, really long time! Lots of different colours for all the bugs too so that the kids can pick their favourites! 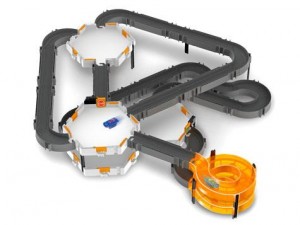 It’s not only a fun toy in the way that the bug skitter around, there’s so much imagination to be used in making up the tracks, and the bugs personalities. Some just seem to act differently than others – not sure if we are projecting that or not! 😉 There’s also sets and bugs that glow in the dark – another really cool element! I did notice that the boys were more into it than the girls, but my daughter has really enjoyed it. She’s even had fun playing it with grandma. And we’ve come up with same crazy ways to assemble it and do some fun races. The sets are all reasonably priced and all come with bugs – I also noticed that they’re all on sale this week at Toys R Us! A great gift to get kids to play together, use their imaginations and just really have a good time. Love hearing all the cheering for the bugs! You can check them all out on their site at Hexbug – I think these make a great gift, and I love that it can easily be packed up to bring along to xmas parties etc. to keep kids busy and entertained! Also nice that you can start small and keep adding on, always something else to look forward to!