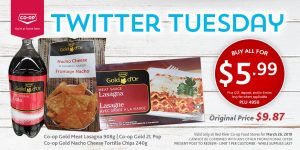 Not a surprising announcement today that this is the final tuesday deal from Red River Coop – they had been pretty lack luster for a while. They do say there will be a new promotion taking over soon – hopefully they had just been focused on that 🙂

So the final deal is an odd mix….you get a lasagna, a 2L pop and a bag of nacho cheese chips for $6.

Only today and one per person…..and that’s it folks!

I’ll keep you posted as to what, if anything replaces it.