The past two decades have seen a series of seismic shifts in the North American automotive market, including rise of the Sport Utility Vehicle, the fall of the sedan, and an explosion of crossover vehicles that blend the best characteristics of the family car and the SUV.

These crossover SUVs have proliferated widely, and now routinely dominate the top spots on year-end best-selling vehicle lists. Among these vehicles, few are as popular or celebrated as Mazda’s CX-5 compact crossover SUV. 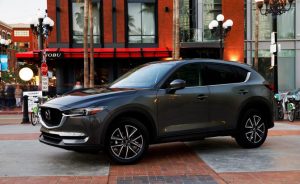 Those who want to know why the CX-5 has attained the popularity it has first need to understand what it is that shoppers look for in a compact crossover vehicle. Unlike other, more specialized SUVs, the ideal compact crossover is something of a Goldilocks — neither too big nor too small, powerful but fuel-efficient, and spacious but still manueverable and agile.

Unlike more specialized vehicles, like the full-size SUV, the compact crossover is designed to appeal to a wide range of potential customers, which means that it needs to do a number of things well. One of the challenges that compact crossover designers face is integrating all the different requirements to create a coherent, seamless driving experience.

One of the reasons the CX-5 has come be seen as such an exemplary compact crossover is because of its ability to do just this. Unlike other vehicles of its class, the CX-5 is just as comfortable to drive when cruising down the highway as it is when rolling over tire ruts on poorly kept back roads.

While it is perfectly suited to a camping trip out in the backcountry, with lots of storage space, reliable towing power, and the lightness to take on even the most twisting and overgrown tracks, because of its intuitive Mazda engineering, it is also incredibly fun to drive on even the busiest city freeway.

Given the CX-5’s ability to be all things to all drivers, perhaps it isn’t surprising that it is consistently one of the best-selling Mazda vehicles — and indeed, one of the best selling vehicles in its class, period. And on top of the number of new CX-5s sold every year, there are even more shoppers who wait to get a deal on a used Mazda because they know it will deliver excellent performance, even with tens of thousands of kilometers already on the odometer.

As the automotive industry tilts even further away from sedans and the SUV increasingly becomes the vehicle of choice for the modern family, brands like Mazda which are able to capitalize on consumer desire for versatile, reliable SUVs that balance the many competing needs of today’s driver will quickly pull ahead.

And if the numerous prizes and rave reviews the CX-5 has received in the past few years are any indication, this plucky Japanese automaker has already established a benchmark for what the perfect compact crossover should look like.