Comparison shopping is one of the easiest ways to save money. If you need something, why not check around and get the best price you can! This can work for groceries – but also for furniture, household goods, appliances, cars – pretty much anything.

Just find what you want, and then look around to see what it costs elsewhere – also keep in mind things like extra rebates, discounts, warranty etc. too. If it’s a larger purchase, don’t be afraid to ask for an extra discount too – a lot of places will price match and even beat their competitors price. If it’s not the same exact item, then you can at least compare features, quantity, size etc. 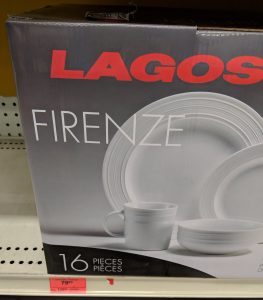 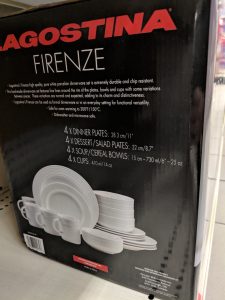 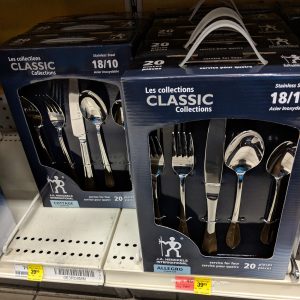 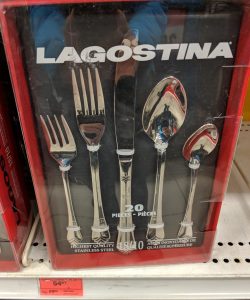 Recently we needed a new cutlery set and a new dish set – both just every day items, nothing fancy needed. I had in mind what I wanted, but wasn’t set on a certain thing. I looked online at a lot of deals and sales, but nothing was exactly right – plus I wanted to take a look in person. Reading reviews is always helpful too – one dishset I loved online and almost ordered… until I read review after review of how hot the dishes got after being in the microwave – to the point some exploded on people. So…..not really what you want in a dishset.

Ended up going between Costco and Canadian Tire after checking out several other stores in the area.

For the cutlery set, I thought I found some pretty good deals at Canadian Tire – they weren’t large sets like I had hoped for, but I took some pictures and just went next door to Costco to see which set they had out. Ends up apart from the brand name, it’s pretty much the same set – except you get 3 times more for the exact same price! Just having the pics with all the info was super helpful too – wasn’t just based on the price, but what they were made of, and how many pieces you get.

For the dish set – Canadian Tire ended up having a store specific sale on just a few sets of Lagostina dinnerware. Really couldn’t beat those prices, but it was still good to look around and compare. And because it was just that store, it wasn’t listed online anywhere.

Costco at least has sets on display to see – but none were what we wanted. The Lagostina sets had such good reviews online and price was great so went with those. By just comparing the two stores (after having checked Flipp app etc.) we were able to make some super quick choices, end up with exactly what we wanted and more. And saved quite a bit too!

Don’t be shy about taking pictures of items too, it’s good to have all the info when you’re trying to decide at the end.

These weren’t large purchases – but same idea with everything else you might need. And, lets you make the best informed choice, and be super happy with what you decide on in the end. When it’s stuff you’ll be using every single day, you want to make sure it suits your needs exactly. Same with appliances and so on. A little bit of legwork really pays off.