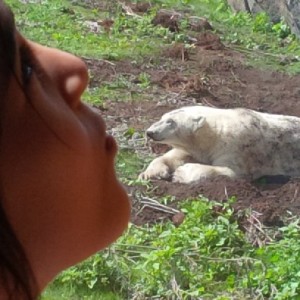 When the zoo announced their new prices it seemed a lot of people in Winnipeg were outraged. It was a huge increase for sure, there’s no way around that one. But were the increases worth it?

We hadn’t been to the zoo in quite a while – when my daughter was younger we went a few times but then it seemed to always be pretty much the same thing. A few weeks ago we decided to go see for ourselves if all the new animals and improvements were that impressive.

Did you know if you go on tuesdays though it’s only $10 per person? Perfect way to budget it in.

We chose to go on a monday to avoid the crowds – no line up at all and you can walk right in. I know a lot of money was spent on the entrance – couldn’t even tell you what there really was apart from a gift shop and a lot of automated machines to pay. 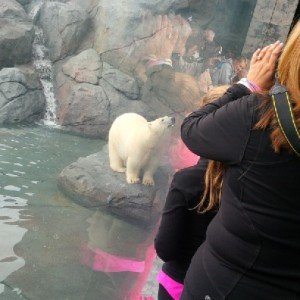 My mom was a bit confused by the machine – but there are a lot of employees there to help out. She paid the entry and I was buying lunch. We had heard the food was expensive, so figured was a fair trade off. Find out later who won on that one! 🙂

Your tickets also have a $5 off at Boston Pizza on them, which we ended up using the next week, so a bit more savings there too!

A lot of the zoo is still the same – but wow have they changed and added a lot!

We were all really impressed with the Journey to Churchill stuff. Since it was really chilly and we went before lunch we got to go right up to the window to watch the polar bears. It was pretty amazing to see – especially when it was standing up to receive food being thrown from above.

We stayed there quite a while watching – it was a first for kiddo and I to see polar bears and it really is a must see for sure if you’re not planning a trip to the real Churchill!

I think that’s one of the big things with the price increase – a lot of the new stuff is world class and not something you’d see everywhere. 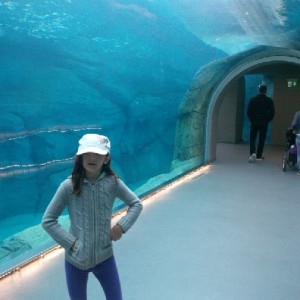 The walkways are amazing too – lots of seals swimming around above you. There’s neat little coves to walk into, and it’s really nice and spread out so everyone gets a chance to see.

It goes quite far, so you really get a neat feeling from it – like being underwater but nice and warm and dry!

It was fun to see how excited people would get when the seals would zip across. Then they’d stop at the window and seemed to interact with the kids.

There’s a lot of cute photo ops there where the kids can stick their faces through and become seals and turtles which is always fun.

There’s still quite a bit of construction going on in other areas, with some stuff missing and other stuff still supposed to be coming in. 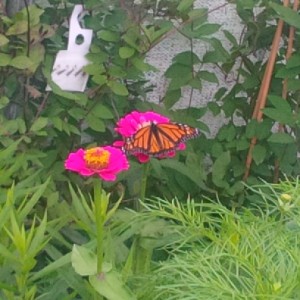 One thing I had completely forgotten that the zoo had was the butterfly garden. Somehow we almost missed it too – glad we wandered over a bit more in that area because it ended up being one of our favourite things there.

Was amazing to see so many different varieties of butterflies – one little boy had one land on his hand and it just wouldn’t fly off. It was super cute.

My daughter was wowed by this exhibit – sort of a dream come true for her! There are benches to sit at and you can just sit and try to see how many types of butterflies you can see. Or just take a little break in a super relaxing environment.

One thing that really surprised me is how many gift shops there are at the zoo – there was at least 3, maybe 4. That’s always hard with kids because they usually pick something at the 1st shop – and you know by the 4th they found something they’ve always had to have. The big gift shop at the start and end has some really random items in there too – a very strange mix of items and it’s a huge store. 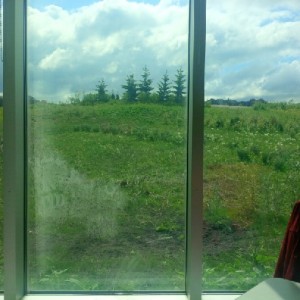 We ate lunch at the Tundra Grill. Kiddo played in the polar bear play area before and just that is a lot of fun for kids.

I had heard it was really expensive and not many choices so I was pleasantly surprised by the menu and price. For the 3 of us it was less than $20 for the lunch! (I won!)

And you just can’t beat that view!! You’re looking right out into the polar bear exhibit – the bears were all napping so none came up while we were there eating. But you can see the paw prints on the window – must have been pretty exciting when that happened during someone’s meal!!

Next time we go I’d want to spend a bit longer in the restaurant and wait for some bears – since it was our first time kiddo was go go go.

For her souvenir she chose a super cute visor that has sunglasses that come down – super adorable, practical and it was under $10!

The three of us had a blast, we spent several hours there. Nice walk around, saw tons of neat animals and it was really fun!

As for the price, my mom and I both agreed it was well worth it for the day we had there. To avoid the crowds we chose not to go on cheap Tuesday – but if you’re looking to cut costs and don’t mind waiting in line (hear some weeks it’s an hour long) that can be the way to go. And if you plan on going several times look into the family memberships – you save at the restaurant and gift shop too.

Compared to other activities like zoos, aquariums, museums etc. that we’ve been to in larger cities this really held it’s own and I feel the price is justified – especially since they offer a cheaper day and memberships.

What was your take on the zoo? Do you find the cost of admission is too high or worth it?

3 Replies to “Assiniboine Park Zoo in #Winnipeg – Are the new admission prices worth it?”